Have touch and tone of your grand piano optimized 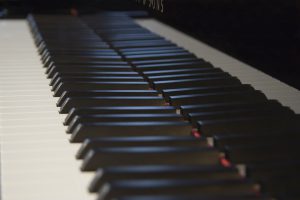 Precision Touch Design (PTD) is an innovative technique to optimize the touch and tone of your grand piano. PTD offers a solution for a touch which is too heavy, too light or very irregular. When, for instance, hammerheads have to be replaced, the touch can be maintained or improved with the use of PTD techniques. PTD offers a solution for those piano players who are hampered, due to physical impediments. PTD is an invention of David Stanwood, who, since the nineties, is well known among piano players and piano technician in the USA. For more information see: www.Stanwoodpiano.com

At the PTD Academy Europe piano technicians are trained to analyze the touch of grand pianos and how to perform a PTD installation on the actions of grand pianos. The Academy, founded in 2008 started with courses in 2010.

Piano technicians who join the PTDAE are constantly updated on the latest PTD related developments and attend further training. The quality of their work produced is met with the highest demands.

If you want to know more, please contact us.

Every grand piano has an action consisting of wooden, metal and felted parts. Parts that between them differ in weight, when weighed on a scale. Graphically mapped, the weight differences gain significance, for one sees exactly why a grand piano sounds differently in certain areas than in other areas. As an example we show a graph in which the strike weight (shank and hammer) of an arbitrary grand piano is shown. The small squares represent the weight of the 88 hammers and stems. It is immediately noticable that the weight from note 1 to 88 does not decline evenly and that there is also a mutual weight difference. This has significance for the tonal idiom of the instrument and for the pianist playing the instrument. Certain areas and tones are to be struck harder than others and there are differences in touchē.

At the same time another ‘quantity’ plays an important role in how a grand piano ‘feels’ whilst playing. Every action has, in fact, a so-called transmission ratio from key to hammer. Mutually, the piano industry has never made any agreements about an average transmission ratio.

“When one presses a key and the hammer goes up, well, that is okay, isn’t it?”

It is, but, dependent on the existing transmission ratio, a grand piano plays lightly, averagely or heavily and anything in between.

So there are no averages? There is no established framework?

No, at least we have not discovered it. The only thing we have managed to find is an average of 50 grams down weight of the keys. But unfortunately, this by no means tells us everything about how a grand piano ‘feels’ during playing.

These past decades the American David Stanwood has taken the trouble to map out everything concerning the performance of grand piano actions in relation to ‘weight’. Weight serving as a basis to optimize the grand piano action.

And guess what: there is a great deal to improve on and to optimize. 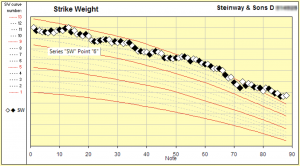 The PTD approach starts with a weight analysis of single action components. In different graphs we are able to see precisely the current state of:

Subsequently, the data are processed to a better balanced whole and the weights of single components can easily be adjusted.

In what cases would PTD be useful?

The options of a Precision Touch Design: